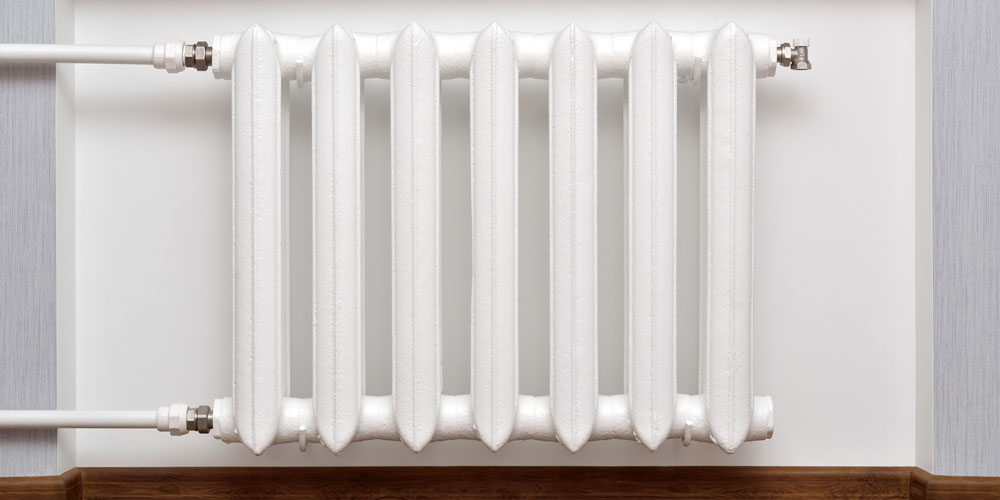 The first to appear on the market were the cast iron radiators, those that we still find today in most of our homes and also in public buildings, in schools in the first place.

Cast iron is a material, formed from an alloy of iron and carbon which, once melted and inserted into molds, can take the desired shape.

This is why it has been used for the construction of home radiators, but also because it is inexpensive, resists wear and tear, it can be easily worked, and it is also possible to create articulated and full of details shapes.

The cast iron for heating has a rather high thickness, which allows to spread heat constantly and maintains it for a long time, even when the heaters are turned off.

In our day it is still used, and for those who choose it, it is possible find new designs that are more modern than the previous ones, although this material lends itself very well to slightly more interpretations vintage. It is destined to last a long time, in fact a whitewashing is often enough to bring it back to life.

The cast iron radiator is made up of various parts. There are three valves that are used to regulate the presence of water inside and allow you to remove the air inside the elements. To do this, simply open the bleed valve, this allows water to enter to heat the radiator.

Then there is the lockshield valve, this too is a valve, which, however, is located on the opposite side from the bleeding side and at the bottom, it is used to regulate the speed at which the water enters the heater. Finally we have the thermostat knob that sets the water inlet and makes it more or less hot or allows you to turn it off. In this way we can activate it only where we need it, without waste.

More and more frequently when you decide to renovate an apartment or go to furnish a new one, the choice of the radiator falls on the aluminum ones.

It is a very different material from cast iron, which naturally also has very different properties. While cast iron tends to heat slowly and to release heat just as slowly, aluminum is a material that heats up very quickly and that cools quickly.

Aluminum radiators are a cheaper solution than cast iron ones, and are far lighter. The real problem of this typology is that the material is attacked internally by rust, even if it is possible to partially overcome the problem through chemical inhibitors.

Aluminum radiators represent the solution compared to those seen previously with the lowest thermal inertia. Practically the elements almost do not retain heat, both upon switching on and off they react immediately.

It is therefore a very advantageous solution for those homes that see the owners present only during part of the day, or in holiday housing units.

There are of course pros and cons about its choice.

On the one hand, aluminum radiators make it possible to obtain a really warm environment in a few minutes, unlike those in cast iron, on the other hand, however, they must always be powered so that their functionality can also be appreciated in the long term.

Unlike those in cast iron, in fact, they are not able to retain heat even at night, unless the system is left in operation.

The aesthetic factor certainly favors the choice of a system with aluminum radiators. Without any doubt these heaters are in fact more modern and therefore adapt perfectly to apartments furnished with an innovative design.

Aluminum radiators are also able to boast another element in their favor. They are in fact available on the market at prices much more advantageous than other types of radiators.

Not only those in cast iron, in fact, but also those in steel have in fact a much higher cost. This obviously depends on the base price of the material which is originally cheaper.

The choice is obviously up to the consumer and must be based on the balance of the different aspects, both of the specific consumption that will then be found in the bill and of the aesthetics of the radiator itself, which in all respects can be considered as a real element furnishing.

In fact, we must not forget that the radiator must never be covered in any way, because this would increase the energy consumption necessary to have a correct heat transmission.

For this reason, therefore, having to leave the radiator elements in plain sight, it will be good to choose them carefully, so as not to have future second thoughts.

Modern radiators have a heat output similar to that of traditional cast iron radiators, but compared to these they adapt more easily to rooms and save energy.

This advantage is due to the materials – steel and aluminum – in which they were made, equipped with a large radiant surface that transmits more heat in a very short time.

Due to wear or a sudden breakdown, it may be necessary to replace the radiators. This often occurs when multiple valves break and therefore their repair would be uneconomical.

Another reason that justifies the replacement of radiators is represented by aesthetic requirements: there are those who intend the radiator also as a piece of furniture, and therefore feels the need to replace it if this does not match its tastes.

The main problem, therefore, might think of having to replace your radiators, is due to the fact that they can be old and worn, as well as failing to allow heating yield and efficiency of latest generation radiators.

DISCOVER THE PERFECT RADIATOR FOR YOUR NEEDS!

If you are considering replacing one or more cast iron radiators, you should consider at least two things about cost.

First, the price of the new radiator. This cost voice will obviously be higher if you decide to choose a latest generation heating.

This cost, however, would be recovered largely through the greater energy savings of the new plants and due to the significant tax deductions that are due to those who make the thermal needs of their property more efficient.

In principle, design solutions cost more compared to “classic” solutions, and the aluminum variants cost more than steel or cast iron ones.

The replacement of radiators is the prerogative of installers and plumbers. It is possible to contact both freelancers, provided they have the necessary qualification, and a specialized company. This second option guarantees compliance with at least sufficient quality standards, but costs much more.

However, if you are knowledgeable about the capabilities of the free professional, and maybe you received feedback on it, you could opt also for the latter.

If you intend to replace your cast iron radiator and you have not yet chosen the type of radiator that will replace it or the type of materials on which your choice will fall, you can safely contact one of our consultants of CasaOmnia, who will be able to guide you in the choice that best suits you. The cast iron radiators allow energy savings ensured also in line with the tax breaks provided by the eco-bonus!

In addition, if you have any doubts, you can leave a comment at the end of the article or send an email to valeriadesign@casaomnia.it and I will try to solve them in the shortest time possible!