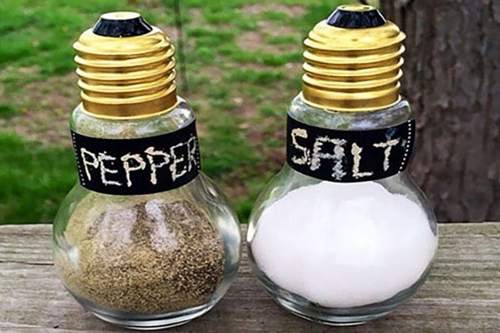 Every object, from the simplest to the most complex, can be given a new life thanks to creative recycling. Often the only things needed are a good dose of imagination and practicality! Slowly everyone can reach good levels in this fun practice and decorate their own home!

We know how important it is nowadays to pay attention to the environment.

In fact, in most cities it is now common practice to make separate collection, in order to reduce waste and allows the reuse of those materials, such as glass or plastic, for which it is possible.

But doing separate collection is not the only way to recycle used items: there is also another way which is that of creative recycling. What does it mean?

Creative recycling means giving new life to old articles. In fact, instead of throwing them away and buying new ones, you can transform them in order to make them usable again at home.

Often, they can also serve to avoid further spending.

For example, many things can be done with plastic bottles: pen holders, flower pots, even parts of an irrigation system. Instead, used car tires become planters for the garden, or swings for children.

Also, instead of throwing away the last remnants of used soap, they can join together to make a new bar of soap.

Historically, financial motivation has been one of the main drivers of creative recycling, because reusing avoids buying new raw materials necessary for the creation of new objects.

Currently, especially in developing countries, some economic development projects have exploited “recycling” for improve the living conditions of small communities.

Examples of paper reuse can be found in paleography, starting from the Papyrus of Artemidorus, and can also be found in the most recent archival research.

Instead between the 30s and 40s, with the effects of the Great Depression, the American society in crisis found itself having to deal with the need to reuse and recover waste materials, since economic conditions did not allow the purchase of raw materials.

Here are the first forms of creative recycling.

During the Second World War, nylon, gum and metals they were constantly rationed to meet the war needs and each family contributed to the recycling operations with a strong patriotic sense.

The moment of emergency ended, while in some countries the habit of recycling was maintained, as in Japan, in others, including the United States, projects have been shelved and landfills have become established as the most hasty and economic solutions to the problem.

The years between the 60s and 70s will have to be waited for to witness the success of the environmental movement crowned with the first Earth Day in 1970 and, therefore, of creative recycling.

Among the primary reasons that determined the start of recycling there was the need to reduce the amount of waste destined for landfills.

Do you think that in 1980 the Americans peaked at 150 million tons of waste produced per year.

Furthermore, in recent years there has been much debate about the costs of recycling.

In fact, studies show that the whole process that starts from door-to-door recycling requires less energy than producing a brand new object.

If we take into account how difficult and expensive it is, for example, the iron mining process, we would have no doubts about enhance the recovery of steel.

Entrepreneurs around these disposal operations have found a way to grow their businesses.

In fact, many companies have specialized in the purchase of used materials, in their recovery and subsequent placing on the market, finding the sector profitable and thus contributing to environmental protection.

Just think that currently, only in the city of St.Louis (USA), the revenue from recycling is around 4 billion in annual turnover and 16,000 employees are employed.

Creative recycling is the reuse of old objects to create new ones, offering them a second life.

For example, an old jar of yogurt can be transformed in a vase for a seedling. Old fabrics can instead go to cover sofas or give birth to rag dolls.

Recycling waste materials is increasingly important today that consumerism has led us to create gigantic quantities of garbage.

In fact, we buy items that lose their charm within a few months or days, then they become garbage, often polluting.

Recycling must certainly start from a more conscious purchase.

However, the products must be recycled. When you throw something away, differentiate it. Throw the glass into the glass, the plastic into the plastic etc.

If you need to throw away potentially harmful or bulky items, there are special collection points in each city.

Creative recycling is something we can do directly.

Put all our creativity on the bench to create something completely new, using old objects that we no longer want.

If it is a topic that interests you, you can also participate to real courses that teach you how to do it.

All scraps are good, at least potentially. Sure if you have a lot of imagination it will be easier to create something innovative but, if you don’t have it, do not worry!

You will find so many ideas and tutorials online that you can experience creative recycling today!

Let’s see, specifically, which materials could be suitable for this purpose.

It is a very used object for the creative recycling.

First of all, the availability of plastic bottles is, unfortunately, practically infinite.

The plastic of these bottles is one of the main problems of the planet, beacause they are often not recycled but abandoned at sea or in the environment in general and take about 500 years to degrade, leaving behind a lot of pollution.

With creative recycling, however, it is possible to ensure that bottles become a new object. Many build vases, containers of all kinds and many other objects.

These are the wooden platforms that are used to transport household appliances and other heavy goods.

They are used whole or disassembled to create a multitude of objects such as tables, beds, planters or backs for climbing plants perfect for creative recycling.

It is not difficult to find pallets in industrial areas, or you can ask directly from the stores.

Usually “abandoned” pallets are not in perfect condition. In fact, due to the heavy loads they carry, they can be damaged, but with wood everything is possible, perhaps you will have to commit yourself a bit more to restore it.

Buttons are also highly sought after in the DIY creative recycling sector because they allow you to create splendid decorations on different types of objects.

If you liked the article, do not hesitate to leave a comment with your considerations about it!

Also, if you need some more specific and personalized advice or simply some additional idea of creative recycling, send an email to valeriadesign@casaomnia.it!