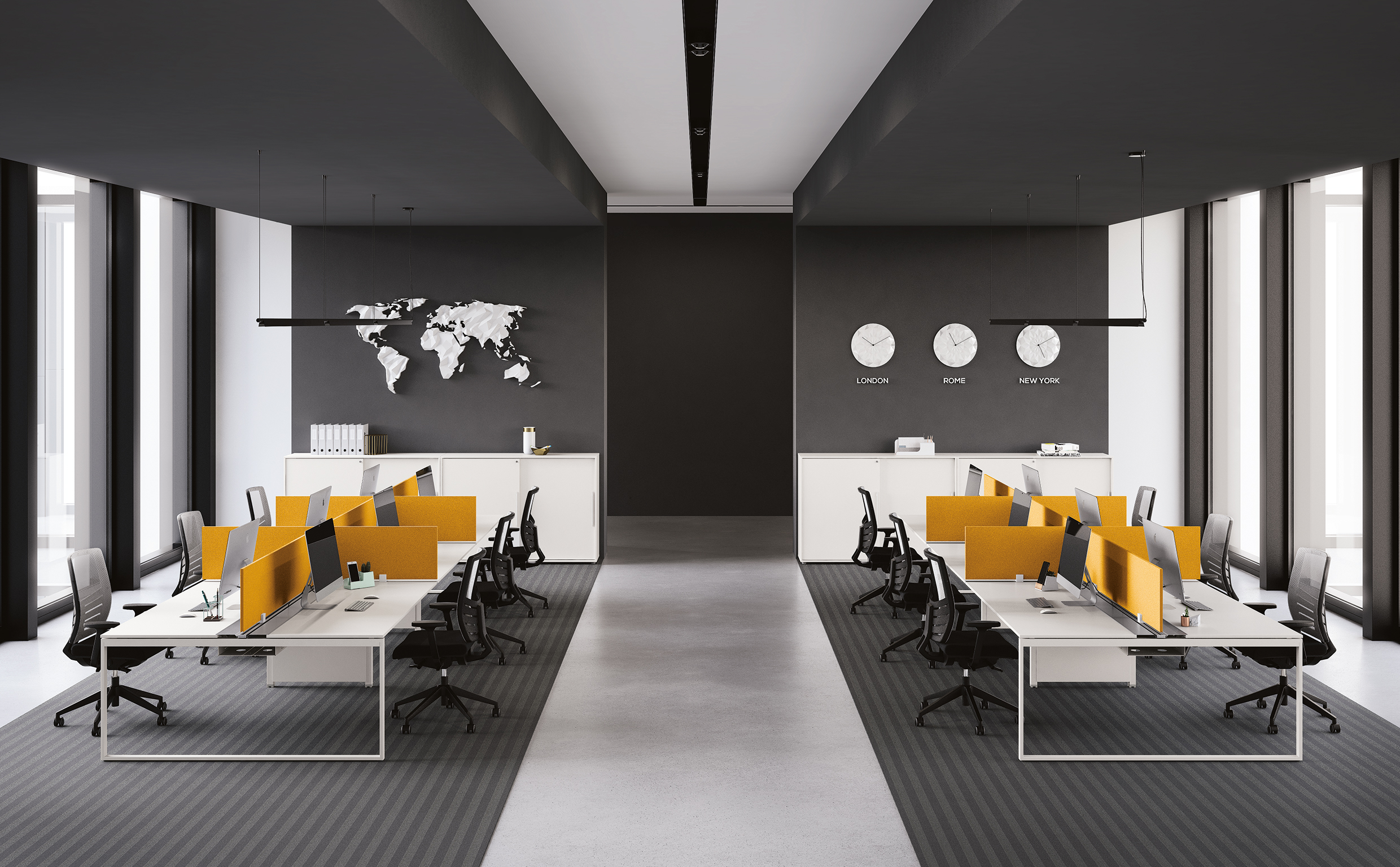 Perceived by all as the real revolution in the world of work, the open space has been able in recent years to spread to most corporate organizational structures.

In fact, most modern companies no longer provide their employees with dull and soulless cubicles but let them graze freely in the maze of the open space, in the name of greater cooperation and sharing of ideas among employees.

Unfortunately, it is discovering that all this is only a dream or, at best, that the benefits of these large spaces for gathering employees, in fact, have definitely been overstimated.

Born to stimulate the sharing of ideas, help between colleagues, interpersonal relationships and to reduce business costs, open-space offices are increasingly being revealed as hell spaces,where chaos reigns supreme. And many now regret the dear old office to be shared with a colleague and equipped with a lockable door.

But the numbers are relentless. In the USA, 70% of offices, according to the data of the International Facility Management Association, develop in a single open space, devoid of divisions. And even the most innovative companies are great proponents of open space. Just think of the largest open space office in the world, able to house nearly 3,000 engineers, commissioned by the Facebook CEO, Mark Zuckerberg, to the architect Frank Gehry.

So there are already those who take a step back and talk about the Hybrid Office, a cross between old-fashioned and open space offices, with panels, partitions and small glass windows to have a little privacy. An example is the project by the American architect Edward Ogosta, second classified in the Workplace of the Future 2.0 competition.

There are several studies that try to give an answer on the subject, let’s go into them together!

Companies realized that cramming employees into one room could save a lot of space (and money). In reality, these open space offices to which workers are now condemned are dysfunctional: in addition to the greater noise and less chance to concentrate, collaboration is also questioned.

A new Harvard Business School study has shown that open office spaces significantly decrease the volume of face-to-face interaction by about 70%. The virtual interaction, via e-mail and instant Messenger, is greater in these cases, therefore:

According to the data emerged from the study, the employees are almost intimidated by the open spaces at work, so much so that they do not feel comfortable talking loudly inside them, because they are afraid of distracting their colleagues. For this reason many remain glued to their workstations and use online chats to communicate.

A frequent complaint of those who work inside an open space is that of the lack of privacy. In these cases, the employees do not have real private spaces, neither to work on their own nor to take a break. Many are uncomfortable with making or receiving personal calls.

One in three workers is often distracted in open offices space, while one in six said that they also hinder creativity.

Another interesting element is that relating to lower productivity. In fact, about 31% of employees working inside open spaces are unable to express their opinion when asked for an opinion at work.

Instead a new report conducted by Auckland University of Technology declares that those who work in open space offices tend to be more hostile and reserved than those who have a single room available for themselves.

In addition, employees who find themselves forced to share their office with more than two people tend to show signs of distrust, have little propensity to make friends with colleagues and are generally less collaborative and more individualistic.

All this stems from the fact that today the vast majority of offices are actually open space, a fashion-craze that has spread in the United States since the sixties and still in vogue, supported by the idea that this type of architecture predisposes to a greater dialogue between employees, thus leading to better productivity.

An interesting study by Cornell University, on the other hand, focuses on the influence that work in open space offices has on employee productivity.

It’s true, open spaces allow an optimization of spaces, they are a solution, as Michael Bloomberg underlined, to ‘promote fairness and transparency’. In short, they allow leaders and managers to keep an eye on employees, controlling their activities, both work and non-work.

But it is precisely work performance that has worsened significantly over the years. In fact, according to this recent study, noise is one of the most ‘reported’ aspects by workers and, according to the data, the sound level of open spaces reduces productivity by 66%.

Also another study published in 2013 on Journal of Environmental Psychology, confirms the situation: many of the interviewees believe that they feel frustrated by the constant distractions and have worsened their work performance, half of the sample reports that the lack of privacy is a big problem and the 30%complain about the lack of privacy.

Not to mention two other fundamental aspects. The first, the easier spread, in an open environment, of viruses and bacteria, which translates into a greater probability, for workers, of getting sick, and therefore of being absent from work. Second, failure to respect the employee’s personality. That is, not all are made to work in a shared space.

The so-called ‘highly sensitive person‘ (HSP), term coined by the psychologist Elaine Aron to describe all those people (20% of the population) who are strongly influenced by their surroundings and whose performance depends very much on external agents, are severely damaged by the ‘constraint’ of working in an open and confusing space. As she points out Lynn Stuart Parramore the open spaces decree the ‘death’ of the HSP.

With evident damage also for companies. Because, as Parramore points out, ‘sensitive people’ are those who, if placed in the right conditions, manage to be more creative and productive than an average employee, but on condition that they are not disturbed or subjected to emotional stress.

WORKSHIFT: THE DEATH OF DOLLY, DILBERT AND DOCTOR NO

Dr. Nicola J. Millard, who combines psychology and futurology, also believes that open plan offices are inefficient. In her white paper Workshift: The Death of Dolly, Dilbert and Doctor No, Millard argues that our office work is constantly disturbed (every three minutes to be precise) mainly due to the conformation of corporate spaces.

“Open plan offices are a model suitable for everyone that does not fit anyone “, explained Millard in a recent conference at New Scientist Live. “We are interrupted every three minutes and it takes eight to twenty minutes to return to the lost concentration. And then there are the emails: we receive far too many. And then meetings, colleagues, all distracting. “

As a result of the greater chaos perceived in open plan offices, Gensler’s Workplace Survey 2016 found that 67% of the UK workforce feels exhausted at the end of each working day because of their office environment.

In addition, poorly designed offices are stifling innovation in companies: although over eight million employees in the UK work in open space environments, many of these do not offer variety or choices, nor are they made taking into account specific tasks and activities.

“Closed office spaces are not an enemy to fight,” Philip Tidd told Gensler. “Moving to a simplistic open plan may not be the most effective option in today’s hyper-connected work environments.”

In addition, a report from the BBC of January 2017 also found that employees working in open plan offices are less productive than 15% compared to those who work in single offices and are twice as likely to get sick, given the easier spread of pathogens among workers in an open space, with a consequent increase in absenteeism rates.

Speaking with the BBC, Sally Augustin, psychologist of the environment and design at Design with Science in Illinois, says that although it is possible to work in crowded places, we do our best when we are able to concentrate totally: “It is a pity to waste capacity by not offering people a place that can promote their work”.

Finally, the Stegmeier Consulting Group, in a study aimed at probing the state of the open-space offices, also collected the various complaints received from the workers they interviewed. Here’s what came out of iti:

Based on these studies and the different conclusions they have reached, we can combine, in two categories, all the advantages and disadvantages associated with working in an open space office. Let’s see specifically what they are:

In reaction to small anonymous and all the same offices, open spaces are created with the aim of promoting sharing, collaboration and exchange of ideas. The advantages of working in open space can be summarized in these4 points:

When open spaces enhance these 4 aspects, in the company there is likely to be an increase in productivity, motivation and well-being of people. If already in 2010, according to a study conducted by the International Facility Management Association, about 68% of people worked in an office without walls or with minimal dividers, this percentage has now grown further.

But is the scenario really so positive? According to studies and research even recent, the popularity of open spaces by employees is very low, and the reasons for complaining are many. In particular, these are reported criticality of open space work:

Open spaces stand on subtle balances, that’s why a good design of the workplace can do a lot to limit the cons and enhance all the positive aspects of an office without walls and separations.

HOW TO WORK WELL IN OPEN SPACE

These are some useful good practices both from the point of view of the company and the person:

Despite being born with the most absolute good faith in trying to make the work environment is a less alienating, more engaging place in which the people could feel at home, in reality the open space office has not able to meet these conditions; here, in fact, that today we start thinking about different office systems.

The architects and professionals propose to opt for a hybrid solution, which involves some small “adjustments”. The suggestion is to focus on flexible rooms and modular workstations, with dividing panels to protect employee privacy. In this way, it will not be necessary to turn the entire building upside down and you will be able to restore some peace of mind to the workers.

Especially to those who, with a scientific term, are classified as “highly sensitive person” or people who are excessively influenced by the external environment and who cannot get a spider out of a hole, when they perceive that they are being observed by others.

Since these are “highly sensitive” subjects, who pay exaggerated attention to what their colleagues might think of them, they in fact make an enormous effort to bear the load of emotional stress to which they are exposed daily. And rather than ending up rash to burn down, they prefer to remain idle, with catastrophic consequences on the performance and self-esteem front.

If you found the article interesting and intend to renew or modify your office environment, whether it is open space or not, do not hesitate to leave a comment at the end of the article and to let us know your ideas and doubts about it!