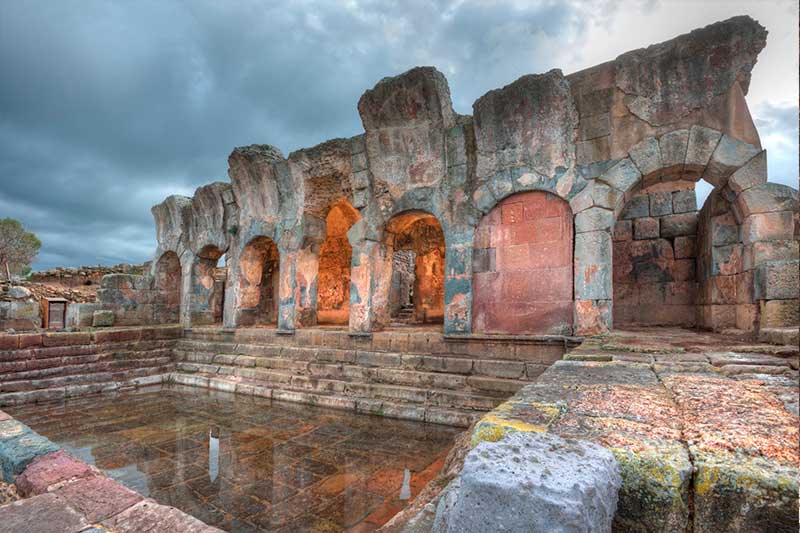 The Roman thermal baths are one of the historical places most appreciated and loved by all for their various beneficial abilities, both physical and mental.

Going to the spa is a lifestyle inherited from the Romans who built spas almost everywhere, making them available to everyone, using their art of collecting, channeling and distributing water, both drinking and thermal.

And they built aqueducts and thermal buildings that have withstood the onslaught of time and are now in many cases archaeological cultural heritage.

For the ancient Romans, thermal baths were not only a way to pass the time but a real ritual.

The Roman baths, which were inspired by the Greek gymnasium and the Egyptian steam bath, arrived in 25 BC. brought by Agrippa.

The public baths were so loved by the Romans that later the emperors competed to overcome their predecessors in building new larger and more beautiful thermal baths.

In reality the thermal baths were not only a place to bathe in hot water but a real recreation and aggregation center, inside the structure there were in fact sports centers, small theaters, inns, restaurants and halls for parties !

Usually each thermal bath offered something special to its guests. It was also open to both men and women without distinction.

In short, these were public places devoted to treatments for the personal well-being of the body but also to culture and social interaction.

The first Roman baths were born in non-random places, mainly in areas with natural springs of hot or healing waters.

Especially in the imperial age, spas became an essential element of the cities in the empire, thanks to the level of technology achieved on the development of water heating techniques.

The underground hearths were responsible for heating the water, spreading hot air from the hypocausts. The appearance of the imperial baths was imposing, so vast as to seem small cities within the city itself.

Inside the spa, Roman citizens followed a real ritual, in fact the articulation of the rooms was developed in succession. Usually they started with some gymnastics in the gym or physical activity outside.

The heart of the Roman baths was represented by five rooms: apodyterium, sudatio, tepidarium, calidarium and frigidarium. Each of these has a specific function, but it is only from their union that the beneficial effects of the thermal bath are best expressed.

The Apodyterium was the main vestibule for the entrance of the Roman baths. The first sensation you had when you entered was that of the discomfort created by the very high humidity present.

This environment consisted of a vast changing room, enriched by various shelves or niches, where patrons could store their clothing and personal effects.

In addition to the changing room, the Apodyterion could also be used as a gym in which patrons could perform gymnastic exercises to warm up their muscles. The path then continued with the entrance to the Frigidarium.

In the Frigidarium the Romans could take cold water baths to temper the organism.

Usually located on the north side of the thermal bath, the frigidarium was equipped with very small windows. These barely illuminated the environment, but above all did not allow sunlight to heat the water in the pools.

The largest frigidaries that have come down to the present day are those of the Roman Baths of Caracalla and the Baths of Diocletian in Rome.

Finally, then moved on to the Tepidarium.

In the Tepidarium, the Romans who came out of the cold water baths found themselves in a transitory environment in which the temperature was moderately higher. This is thanks to the passage of hot air under the flooring.

In this place the water was lukewarm, so as to prepare the subject in question for hot water baths and saunas.

Hot water and steam baths were held in the Calidarium, then called respectively “alveum” and “sudatio”.

The Calidarium was usually built on the south side of the structure, to take full advantage of the sun’s heat.

Even this environment could have been equipped with one or more swimming pools, but it is not sure at what temperatures the waters were brought, it is certain that if the Romans wore sandals with wooden soles, the water would probably not have exceeded 55 degrees.

In this room were the slaves who fed the fire to heat the water and the rooms.

Under the floor of the various rooms there was a free space, about 60 cm high, in which bundles were burned which, through the floor itself, heated the rooms.

The fire came in this way also under the different bathtubs that were to contain hot water. The hot air formed in this empty space, rising through the terracotta pipes placed under the plaster, also heated the walls and then get out of the roof.

The route as described was certainly not exhaustive, a Roman was in fact free to do it also in the opposite direction, but what did they use to take care of their body?

One of the main habits was to sprinkle the thermal waters with particularly spiced wines or with perfumed essences while for washing they used pumice stone or beech ash instead. In addition, clay and olive oil were also widely used, the latter was then removed with a small curved tool, called strigil.

The Romans who had finished the baths could move to other environmentswhere regenerating massages were practiced, practiced with perfumed oils and essences.

In addition, the Roman thermal baths included around their enclosure a series of activities related to life in the spas.

In fact, various accessory spaces housed the sauna, the gym and the changing rooms, while in the most sumptuous and refined spas one could also find space for great artistic expressions such as theaters, suggestive water games, imaginative floor mosaics, marbles and libraries and shops.

EVOLUTION OF THE ROMAN THERMAL BATHS

With the fall of the Roman Empire, the use of thermal baths disappeared.

The cities of medieval and modern Europe knew nothing of the sort, and also for this reason the hygiene conditions of their inhabitants were much lower than those of the Roman era, and the most widespread epidemics.

The Roman baths, in fact, had above all a hygienic function. We know that the homes of ordinary people were quite unhealthy, without running water and toilets. The spas were instead large and airy spaces, clean and full of light where the water flowed in profusion.

The Roman baths instead survived in other areas and in other cultures. In fact, the so-called “Turkish bath” derives from them, which became a characteristic element of the Islamic world.

FROM THE ROMAN THERMAL BATHS TO HAMMAM

Taking a cue from the Roman baths in Africa and the Middle East, the Arabs revisited everything while maintaining the charm of those places, delighted by the abundance of water and the pleasures of bathing.

With the advent of the hammam – the Turkish bath – this path has been turned upside down for several reasons.

The typical path of the hammam has in fact become a sequence of 3 rooms, which unlike the Roman baths range from the warmest to the freshest. However, this path was followed by relaxing full-body massages.

The three different areas are called:

Important ceremonies were held in the hammam such as the one preceding the wedding and still today it is the place of choice for women who recreate their hygienic, aesthetic, therapeutic but above all social rituals.

A pleasant and intimate place in which to let yourself go freely to chatter, gossip and outburst.

As the sacred law requires, hammams are very clean and tidy places, so much so that in ancient times even the figure of an inspector assigned specifically to control the cleanliness and quality of the water was established, while the massage workers used to rub the palms of their own hands with the pomegranate rind to make them harder and more fragrant.

There is no doubt that the Roman baths have always aroused fascination in everyone’s imagination. In fact, even today, the spas or thermal baths, evolution of those first public structures, attract numerous patrons every day.

This type of public places is, by now, undoubtedly giving people the opportunity to take a few hours of true peace and relaxation, essential to face the frenetic rhythms of today’s everyday life.

Nowadays, thermal baths are regaining importance among citizens, in fact there is an increasing number of spas and private spas.

Unfortunately, unlike the Roman baths, these are paid (and not too cheap), but thanks to modern technology and studied relaxation techniques, in addition to the thermal baths, these structures also offer other interesting and thick activities.

In addition, of course, to providing customers with relaxation areas, bars and restaurants.

Furthermore, especially in Italy, we are fortunate to have numerous natural thermal sites, where entry is free and you can live a real experience of relaxation and tranquility, even in the midst of nature.

Having ascertained both the mental and physical benefits that derive from it, wouldn’t it be an excellent idea to revalue the spa as a public place for socializing and sharing just as it was usual for the ancient Romans?

Finally, thanks to modern and innovative technologies, having your own spa corner is no longer a dream! The TREESSE thermal bathtubs in fact fully satisfy this need for absolute relaxation.

These types of tanks give the possibility of being able to immerse yourself in three different water levels: hot, neutral and cold. Just as if you were at the spa!

Furthermore, these tubs can be set according to 6 different types of programs, in which the combination of the type of water and particular essential oils leads to a feeling of relaxation and inner peace without equal.

Specifically, the 6 programs available are:

DISCOVER THE PERFECT THERMAL BATHTUB FOR YOU!

If you found the article interesting and you have further curiosities about the origin and evolution of the Roman baths, do not hesitate to leave a comment at the end of the article. Also if you want to discover other details of the life of the ancient Romans, go here!

Finally, if you want to recommend other items of historical interest, let us know in private, by sending an email to valeriadesign@casaomnia.it. We will consider your most interesting ideas!