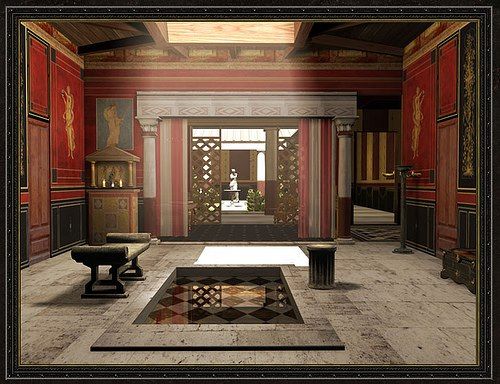 In ancient times the houses and, consequently, the various rooms of which they were composed, were built and furnished with completely different styles and materials from ours. Let’s find out, by jumping into the past, how these houses were made and, specifically, how the bedroom of the ancient Romans was furnished!

In Roman times the methods of construction of the buildings were decidedly different compared to our modern techniques. In most cases, the cadastral boundaries remained fixed within the city and new buildings were born on top of the old ones, without the debris being taken away.

Rome presented itself as a green city, the vegetation between public and private gardens, sacred woods and imperial gardens, covered a third of the city. At the time the pre-eminent colors of the houses were the red of the bricks of which the insulae were made, as well as the red of the Roman tiled roofs. Towards the center, on the other hand, the white of the travertine and the marbles of which the domus, temples and government buildings predominated.

There are different types of homes used by the ancient Romans, including the Domus, the suburban villa, the insulae etc. In this case we will focus on the importance and diffusion in the imperial territory of the domus, used by most of the Roman inhabitants.

Nowadays, houses generally appear as small apartments full of furniture. If we could instead admire a typical Roman house of two thousand years ago, we would immediately notice a detail:the generally bare walls and the half-empty rooms.

But the appearance was not that of a sad or abandoned place. Quite the contrary; in the patrician houses the walls of the most important rooms were richly decorated and covered with paintings depicting fake marbles, rural landscapes, gardens, colonnades, fruits, garlands of flowers.

The effect was delicious, with strong colors, which made the rooms lively giving the illusion of being wider than they actually were.

The Roman domus all had a quadrangular shape and, moreover, they were completely closed to the outside with a few windows, small and positioned upwards.

The houses of wealthy families, called domus, were houses made up of many rooms, with one or two floors. In the part facing the street there were no windows, but only small openings to allow air circulation, while the entrance door of the house faced a corridor, called the vestibulo. It reached the center of the house where there was the atrium, or an uncovered square space on which the doors of the various rooms were located.

The atrium served as an entrance for air and light and in the center of it there was a basin, called the impluvium, where rainwater was collected which was used for domestic purposes. In addition, a marble bench, flowers and some statues could adorn the atrium. The triclinium was the main room which served both as a dining room and as a parents’ bedroom. Then there were the bedrooms of the children, those of the other family members and the slaves, the kitchen, the warehouse and the closets. Finally, the houses were decorated with marble columns, precious curtains, frescoes on the walls and mosaics on the floors.

Poor families lived in houses, often rented, called insulae. These were multi-storey buildings made up of various apartments called cenaculum. Often, a family lived in a single room where their whole life took place and, often, this room did not even have a window.

The water was taken from the public fountains where they also went to wash clothes. These houses were made of wood, in fact, since oil lamps and braziers burned in the insulae to illuminate and warm themselves, fires often developed.

The wealthy landowners, besides having a home in Rome, also had one near their lands. The rustic villa was the farm owned by them, made up of the house, lands and animals and surrounded by a high wall. The company was carried on by slave labor.

The rustic villa had two courtyards, each with a tub:

Around the internal courtyard there were the slave houses. The kitchen of the rustic villa was used for meetings and for various types of work. In the villa there were also barns, dryers and warehouses.

THE BEDROOM OF THE ANCIENT ROMANS

In the Roman house, cubicles, ocellae (rooms with a more generic meaning) were said to be the rooms, generally not large, which were arranged to the right and left of the entrance, on the sides of the atrium.

There is no doubt that at a later age the cubicles lost their primitive office: but originally those rooms were to be used for the night rest of the children and secondary members of the family, while the father and mother slept in the tablinum.

The cubicles repeated the arrangement of the Homeric house, where the children’s rooms were arranged on one side and on the other.

Under the Empire, by extension, the stage from which the emperor attended the shows was also called a cubicle; but the first meaning was alive in the office of praepositus cubiculo, first waiter or chamberlain of the imperial court; his servants were the servants or freedmen (cubicularii). Today, the small burial chambers of the catacombs are indicated with the same name.

ORIGIN OF THE TERM

The cubicula or cubicolo is a small room in the Roman house intended as a bedroom, generally flanked by other similar ones and located around the atrium.

There is talk of cubicolo also for chamber burials reserved for one family.

The Latin term cubicle shares the same Latin derivation, the modern meaning of which corresponds to that of a single workstation in an open space office.

BEDROOM OF THE ANCIENT ROMANS: HOW IT WAS FURNISHED

For most of us it is of fundamental importance to devote a lot of attention to bedroom furniture and to do careful research on the best materials for the preparation of the most important piece of furniture, namely thebed.

The bed is a very important article if we plan to spend most of our time on it, but it will be even more if, instead, we will only enjoy it for a few hours a night. In fact, in those few hours we must do our best to promote rest and relaxation.

But in the past this has not always been the case. The bedroom has not always been assessed for its fair importance. In fact, in Ancient Rome, in contrast to the luxury and the general splendor of the domus, bedrooms and comfort were not given particular attention.

In addition to the beautiful decorations on the walls and floors that have come down to the present day, the rest of the bedroom of the ancient Romans was quite basic.

La camera da letto degli antichi romani si chiamava Cubicola. They were small rooms, most often without windows and opened on the left and right sides of the atrium. Generally the owners slept in divided beds, sometimes in one room, sometimes in two separate rooms.

The Cubicula were small, dark bedrooms similar to small cells whose lighting provided only weak lamps that highlighted those masterpieces of frescoes or mosaics that often decorated these rooms, and the alae, two open hallways.

On the two wings of the peristylium there were the chambers, the master cubicula, a little wider than those in the atrium wings, sometimes with a window with grates.

The cubiculum generally had a mosaic floor with white tesserae with simple ornaments, the paintings on the walls were divided by styles and colors from those of the rest of the house and the ceiling above the bed was always vaulted.

The furnishings of the cubicula consisted mainly of beds, the most common were single-bed beds (lectuli), then there were those with two squares for the couple (lectus genialis). The beds were usually with three backs and could be in bronze, more often in worked wood or in exotic precious woods that polished emanated as many colors as the feathers of a peacock (lecti pavonini).

They could also be made of wood, with moldings, inserts in worked bronze or mother of pearl or glass paste and animal legs. The bed at the time was not very comfortable, as it used to be in our countryside until the first half of the 1900s. In fact, the simplest beds were even made of terracotta.

On a wooden frame rested crossed straps with a mattress and a pillow on top, with padding of wool or swan feathers, in other cases in straw.

A mattress padded with leaves was found, for example, in Herculaneum, perhaps for an antiparasitic action. The mattress was covered with two blankets, often simply two sheep or goat skins, one for resting and the other for covering.

To tell the truth, in the poorest houses there was no real bed either: in the tiny bedroom of the ancient Romans there was a parallelepiped of brick and plastered bricks on which the mattress stuffed with dried vegetables was placed and nothing else .

Generally, these beds were rather uncomfortable. In fact, there are many testimonies on the additional use of animal skins in bedroom furnishings. These were not only a luxury for the landlord, but were a real need: they were used to provide an extra soft layer on the hard bed in itself.

Other furniture in the house are the wooden chest with bronze or leather coverings for clothes and linen. In addition, there were also wardrobes, not imported by others, since it was the Romans who invented them, tall and with two doors in perforated wood in general.

They were not used to store linen or clothes but to protect or contain precious, delicate or primary utility objects. Then shelves like sideboards, tables and small tables, all in worked wood, sometimes with precious marble tops.

Small safes have also been found, bulky heavy bronze cases with studs, keys and bolts, because the Romans already used them for the doors of the house and for shops. Different types were discovered during the archaeological excavations in Pompeii and elsewhere, with male keys and female keys whose delivery used springs.

They also had secret devices, with invisible drawers or levers to push, or with double bottoms, like Chinese boxes. It is no coincidence that the Romans, to indicate the need to keep a secret, said “sub clavi esse”, that is to be under lock and key.

Sometimes it is necessary to take a look at the past, not so much to discover new things but to give the right value to our present. In this case, we discover that comfort in the past was not a must-have, as it is nowadays and this should teach us to give, therefore, the right importance to all those things that we take daily for granted.

In this article they are not present tips on how to decorate or historical periods from which to be inspired, but rather, we want to make readers aware of a past that no longer exists, and which however continues to be part of us!

If the story interests you and you want to know other people’s habits of furniture, let us know by leaving a comment at the end of the article and we will be happy to be inspired by your ideas!