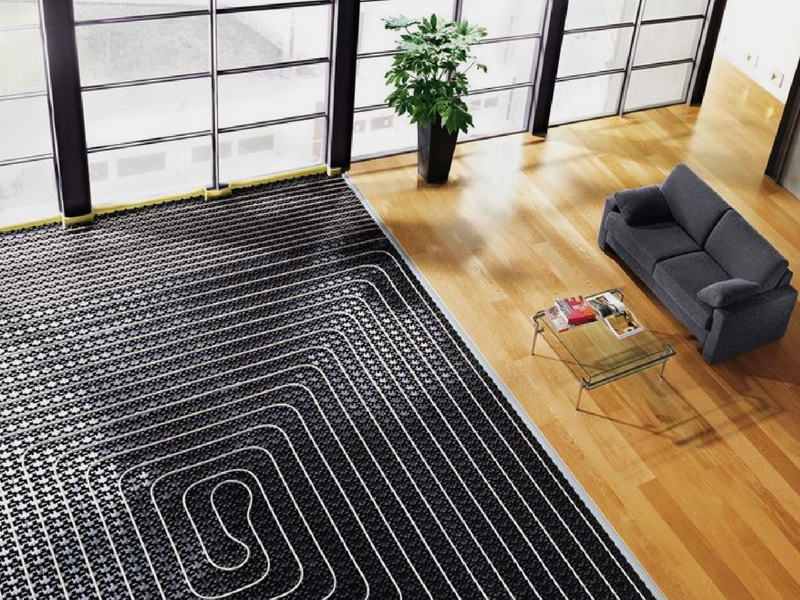 UNDERFLOOR HEATING: HOW IT IS AND HOW IT WORKS

A underfloorheating, also called radiant panels,is composed of pipes where water circulates at low temperature, which diffuses homogeneous heat from the bottom up, ensuring optimal comfort.

For this reason it integrates perfectly with low operating temperature systems, such as heat pumps and condensing boilers. This combination guarantees efficiency of thermal efficiency and savings in terms of energy consumption.

Modern systems and materials adapt perfectly to this type of system, without the risk of ruining or limiting the thermal efficiency.

In fact, a well-insulated attic makes the most of the advantages of this system, preventing the heat generated from dispersed.

The floor system is composed of several weldens housed in the upper part of an insulating panel arranged under the floor inside which the hot water circulates.

The panel does not allow the dispersion of heat down (the slab)leaving the heat free instead upwards (the screedand the floor).

The screed functions as a heating element as it collects heat with its high thermal inertia and slowly releases it from the floor.

This type of heating does not require high temperature water, in fact this is around 35 °, compared to more than 70 ° of radiators.

You can lay any type of floor above radiant heating and, thanks to the latest innovative systems, there are no longer the problems related to a minimum installationthickness (laying space).

Thanks to this division it is possible to adjust the temperature to your liking thanks to a thermostat in each room or area depending on the project.

The design of these systems must therefore take into account the division of the areas as well as the type of floor and the thickness of the screed.

It is the ideal solution to obtain efficiency and savings from domestic heating.

Using high performance and advanced technology, this boiler recovers part of the heat contained in the exhaust gases and transforms it into water vapor.

Thus, we are able to exploit the fuel by guaranteeing a higher efficiency than the old systems.

In a traditional boiler the gases are ejected at 110°C.

A new generation boiler is designed with a system that before expelling the gases, lets them pass through a heat exchanger.

Which manages to condense the water vapor, allowing the transfer of the latent heat of condensation to the water of the primary circuit.

Thus, the collected exhaust gases are ejected at 40°C and the heat that would otherwise be dispersed is immediately recovered.

A condensing boiler manages to guarantee a lower fuel consumption than a traditional boiler, with the result of a recoverable energy share of around 16%.

Often, together with the decision to install a new boiler, the choice of the best solution is presented to ensure uniform heat in the home.

The proposal by architects and engineers of underfloor heating is becoming increasingly widespread.

In fact, through the combination of the two systems it is possible to obtain a very efficient thermal efficiency and considerable energy savings.

Having said that, let’s see what are, specifically, the constituent elements of such a plant:

Uniform heat throughout the house

An underfloor heating system ensures excellent heat propagation as it distributes it in the rooms by radiation.

Through this property, the hot air being lighter than the cold air from the bottom slowly propagates upwards.

In this way, underfloor heating exceeds the limit of traditional heating systems: that of tending to concentrate heat in the areas closest to the emission source;

Ease of laying and reduced maintenance

It is easy to install and does not require frequent maintenance. Furthermore, it does not invade the living space as it is a heating system devoid of visible elements thus allowing a wide architectural and furnishing freedom.

Finally, it does not require maintenance such as the repainting of radiators or adjacent walls;

PLEASE NOTE The water loaded into the plant is the same as that which circulates throughout its operation and, over the years, could be affected by deposits or sludge.

To prevent this from happening, after an analysis of the PH of the water, a specialized technician can carry out a treatment of the water in the system.

The treatment softens the water in the pipes and, thanks to specific products, blocks future formations of limescale deposits.

The system is positioned under the floor and allows you to recover a lot of space in the rooms, thanks also to the elimination of radiators;

It avoids the formation of mold and dust and represents the best solution also for automatic mechanical ventilation systems;

It adapts perfectly to systems that use renewable energy such as heat pumps, biomass boilers and solar thermal panels, since a temperature between 30 ° C and 40 ° C is sufficient (radiators require temperatures around 70-80 ° C) ;

It can remain active throughout the day and installed in every type of home, even condominiums. During its use, the air is not moved and therefore the dust does not rise: suitable for allergy sufferers;

Thanks to thermal inertia, it ensures well-being even after hours of shutdown;

This system can also be converted into a cooling system.

Simply with the introduction of cold water (even only 15-17 ° C) instead of hot water, you get the result of refreshing the environment without the disadvantages and energy consumption connected to the air conditioners.

This also avoids the additional expense of purchasing air conditioners.

Rather than a disadvantage, it is a piece of advice: limit the use of rugs. Any covering on the floor can limit the heat given off by this system, albeit to a minimal extent. In fact, particularly bulky furnishings on the floor limit the irradiation space;

To take advantage of the tax deductions and be able to save on the installation of the entire system, you have less than 10 months: 31/12 will be the deadline to be able to use it and you are not sure that the period will be extended as happened this year;

It is not the optimal product for those who need immediate heat concentrated in a few hours, in fact the heating with radiators being low thermal inertia allows to reach the temperature in a short time while the underfloor heating must be turned on at least 24 hours to reach the optimal temperature;

For now and forever

After the installation of this system, there is no room for substantial changes, since the heating pipes are inaccessible without operating on the floor. For example, in the event of serious leaks or malfunctions, the floor affected by the fault must be removed, even if this circumstance is currently highly unlikely given the resistance over time of the materials used;

The investment that must be made to install underfloor heating is much greater than that required for a traditional radiator system. This disadvantage, however, can be compensated by the high energy and tax savings due to the use of this system.

The floor system is a very fashionable type of heating in recent times, not only for its innovative heating capabilities of the rooms, taking advantage of the principleof radiation, but above all for its eco-friendly characteristics and the possibility of drasticallying the cost of the energy bill.

In addition, this type of heating is very efficient just like pellet stoves,and both give the possibility to make your thermal needs as efficient as possible.

The average price of a water-based underfloor heating system, including insulating mattress, piping, boiler and installation, is close to 50 euros per square meter.

But the price range is much wider, 35-75 euros per square meter depending on the quality and quantity of the material used, the amount of heat that the housing unit needs and the professionalism and guarantees of the company that carries out the work.

As you can see, the price for mounting this system is quite high, but to avoid leaving the ball of the game in the hands of the company that takes care of the works, our advice is to hear the opinion of a expert in thefield, who can advise you and guide you, impartially, to meet your needs.

In addition, some argue that the traditional aluminum radiator system is more competitive than that with radiant panels with a careful management that essentially takes into account the hours in which the whole house is actually occupied.

With radiant floor panels, it is necessary to take into account the fact that the heat diffusion, despite being greater, takes a long time to reach every room inside your home. This type of system needs to be kept on continuously (24 hours a day) and this can be problematic if you need to heat the house quickly and for a few hours a day.

These heating systems represent the future of the sector,not only because of their minimal visual and socially responsible impact, but above all because of the technological innovation that accompanies them.

These systems, thanks to the diffusion of heat by irradiation, are able to heat the whole house uniformly and constantly, including every environment.

If you liked the article or need more information about the topic covered, do not hesitate to leave a comment at the end of the article or to write us an email to the following email address: valeriadesign@casaomnia.it